Know Before You Show 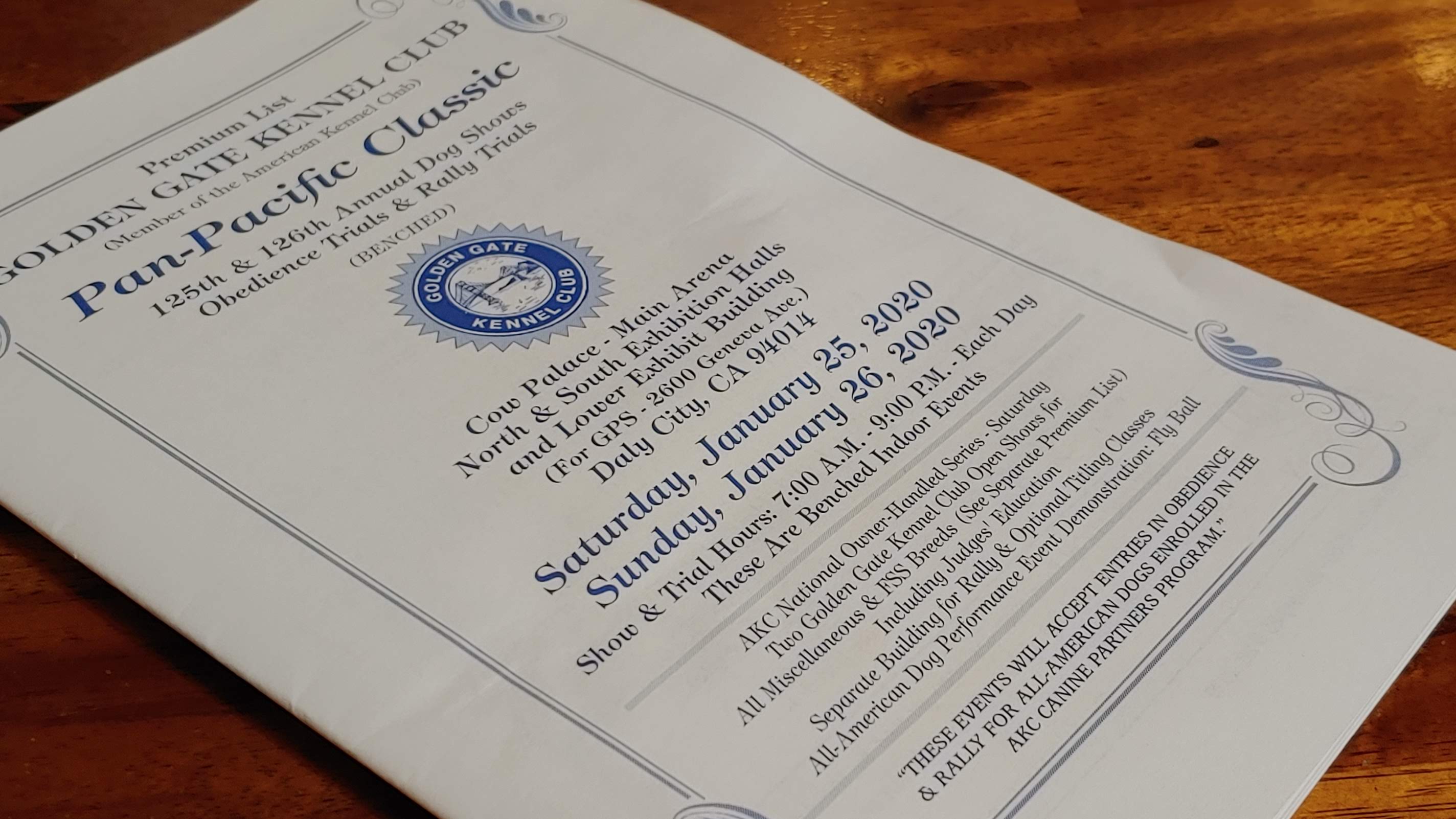 I had a hiatus from obedience for over 15 years. If I ever knew the tips and tricks I’ve discovered over the past few years of showing Lackey and now Arya, I must have forgotten them. Competing is stressful enough if everything goes smoothly, and it becomes more stressful if it does not. So I thought I’d share my tips for keeping things running smoothly for yourself.

It goes without saying that your dog should be trained to a level where you think he’s likely to qualify in the sport you’re planning on competing in. It’s also really helpful if he’s comfortable being left in a crate for at least 15 minutes, especially if you’re competing in Rally. If he’s not, plan to bring a helper. Dogs are sometimes not allowed in the bathrooms at trials, so even if you aren’t going to do a Rally walkthrough, you almost certainly will need to go to the bathrooms.

Once you find a trial you want to enter, you’ll want to get a Premium List. You can enter trials associated with all-breed shows through the superintendent’s site (for example, infodog.com).  Trial premium lists can usually be found online, but you can register with your local show superintendent to have premium lists from within a given area sent to you. You can also register with the secretaries of independent trials to be sent their premium lists, but I tend to like to fill out the form online, print it, and mail it. Often there will be a link on the club site to an entry service that will handle the whole thing (for a fee), but you can use their online form to fill out your entry and print it for free. There’s often useful information like whether your ring will be indoors or out or even the order of classes in the premium list, so if you get the paper premium list, read it, and if you don’t, check out the pdf.

As a general rule, you can expect that the more advanced classes will run earlier than the beginner classes, though there are some exceptions. For example, it’s not uncommon for Beginner Novice to run before Rally.

When you get your envelope

I usually look at the schedule first—in the front will be a listing of what events will be in what rings at what time. Obedience and Rally are usually about ⅔ down the list. Don’t take those times too literally, especially times after 11 am.

Flip back in the schedule to the individual schedule for each ring. The times you’ll find here are the earliest you can expect judging for that class to start, and you may notice a lot of the times have changed to simply “after lunch.” Believe that. Your class isn’t going to start at 11:30.

Once you know when and where you’ll be showing, pull out the id that was also in your envelope. It took me an embarrassing number of years before I realized my actual armband number is printed on this document. Now look back at the ring schedule and find your armband number in the list for the class (in the schedule for the individual ring), and that will give you an idea how many dogs will show before you once your class gets rolling.

It can be very frustrating figuring out when “after lunch” classes will start. Here are my rules:

In addition to obvious things like food, water, and treats for you and your dog, you’ll also want to bring a chair. Sometimes there are “public chairs” anyone can sit in, but there are almost never enough for everyone. It’s helpful to wear a watch–there are a lot of times pulling your phone out isn’t convenient, and time is often of the essence. You probably still want to bring your phone, though.

If the trial is outside, you should plan some sort of shade, at least for your dog. The tents that shade the judge and steward often are not available for public use, and you’re not going to be popular if you violate this unwritten rule and someone’s dog fails to qualify because you’re too close.  This is doubly true if it’s an outdoor show with no ring gates.

In my area, reflective mesh tarps are popular to throw over crates and even vehicles with the doors and windows open. Many people also bring popup shelters and tents. I noticed the Coleman shelters fared especially well at a recent show that had gale-force winds overnight, so that’s what I bought to replace mine that was crushed under a Coleman. If it’s hot, consider bringing cooling mats, crate fans, and misters. Now you have so much stuff to bring, you might find your life is easier with a folding cart or a crate dolly.

What to do when you get there

Try to arrive early so you can find a space to set up that works for your dog. In some venues you can drive right up to the door the night before. This is also helpful to do on large sites if you don’t know where your ring is, so you’re not panicking 10 minutes before your published time trying to find ring 6.

Usually the ring stewards are not signing people in until about 15 minutes before the first class. If Rally and Obedience are in the same ring, often this means that they don’t hand out armbands for the one that is second until the other one is done or nearly done. Pick up your show id and remind yourself of your armband number so you can tell the steward your class and armband number and they don’t have to look it up. Make sure to thank them for stewarding–often people who steward are choosing not to compete in order to let you compete.

Look next to the ring entrance. You should see a printed schedule similar to the judging schedule you were mailed. Usually, ring stewards will mark off each armband number as it’s picked up, and they’ll cross through it a second time (to make an “X”) once that did had shown. They’ll also sincerely try to communicate if the order has changed for any reason. So if you don’t see this schedule, ask where it is. Once it gets close to time for your class to start, take a photo of it in your phone. That way you can see how close you are to showing without constantly running up to look–you just need to watch armbands from your chair.

If you’re showing in both Rally and Obedience, try to anticipate if you’ll have a conflict and ask to be moved in the class. This doesn’t always help, but try anyway

You’ll often be able to pick up a map of the course when you pick up your armband. I like to get mine as early as I humanly can. I will usually find an empty space outside, imagine the course in my head, and walk it several times.

Next, I will pull out my sign descriptions and read the description for every sign on the course–even signs I think I know–just to make sure it’s fresh in my mind. I usethe K9 Rally App, available for both iPhone and Android.

I try to look for areas that might benefit from some extra practice with the dog, either during warmup or if there’s lots of time I might do a little practice session for those problem areas. If I am feeling comfortable that I have time, I’ll walk the imaginary course again.

I set my watch timer for 10 minutes and hope I’ll remember to use it to take full advantage of the walkthrough. Often there’s a traffic jam at the first sign when everyone goes in for walkthrough, so I plan which sign I want to start at if I can’t get to sign 1 within a few seconds (again, I try to take full advantage of my 10 minutes). I look for an area where there’s a possibility I could go off course, or one that I want to go through an extra time because it’s part of a tricky sequence. Thanks to Bea Moore for this tip.

Rally goes quickly, so I take my dog out to pee and warm up about 3 dogs before I show. In Rally, there are only 3 jump heights, and they’re pretty good about doing 8, 12, and 16 in that order (unless someone moves), so that can help you keep an eye on the flow without looking too hard at individual arm bands. At many shows, they will post jump heights on the schedule by the ring entrance, so you can know that your height category starts with dog #96. If you have a catalog, you can check what breed that is. If you don’t, you can ask to look at the steward’s catalog. Tip: you can sometimes order your catalog in advance when you enter.

At a minimum, the judge will show you the heeling pattern before the first dog goes. The more beginner the class is, the more she’ll tell you about the rest of the routine (where the figure 8 will start, and where the recall will be, for example). If I’m not first, I like to watch the first dog or two so I can hopefully move smoothly from one exercise to the next. I keep telling myself I’ll draw a diagram, but I never seem to remember to bring my notebook to ringside.

Obedience judges will take a minute or so between dogs, so I try not to hurry up to ringside. I’ll generally decide when I’ll start warming up my dog during the previous dog’s run when I’m watching the first couple of dogs. I also try to have a backup plan for keeping my dog ready if the judge spends several minutes talking to the previous exhibitor or takes a bathroom break.

No matter how excited you are that your dog rocked his run, be considerate of the next dog and other dogs in nearby rings and reward away from the ring, especially if you’re using a loud squeaky or you’re going to get your dog really excited. Another thing to remember is you don’t have to take your dog in for awards if you think it’s better for your dog not to go back in.

I think any sport is more fun if you’re prepared and have a plan. Hopefully this guide will help you be ready to enjoy your show experience even more.