Can My Puppy Train Me to Be a Better Trainer? 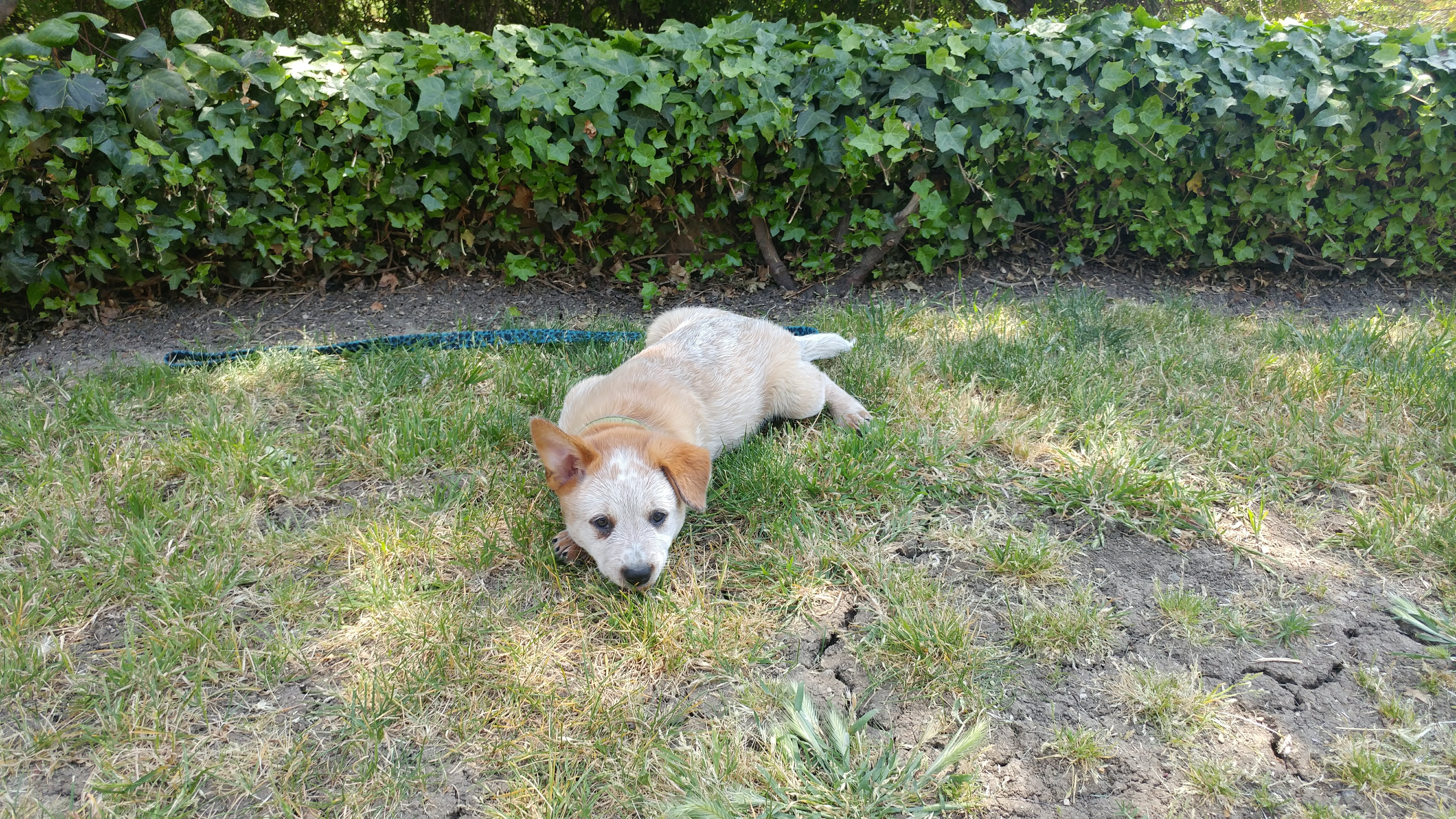 She joined our household about two weeks ago, when she was eight weeks old. She came to me with the best foundation imaginable, but she is a baby, and she is a Cattle Dog. So I have a lot of work to do.

Learning from the Past

When I got Lackey, I had big dreams of all the fantastic behaviors he would have, and I rushed to stuff his head full of all sorts of sexy skills. I kind of assumed I was working with him all the time–everything else would take care of itself. After all, every other dog I’d had was comfortable in a crate by the time I’d had them a few weeks. Leash breaking had never been that big a deal before. And so on. This was easy stuff, focus on the hard stuff.

But just the fact that Lackey couldn’t relax in a crate limited what I could do with him. In Rally class, I always had a timer going in my head counting down to when he would get anxious and start barking. The problem is, the Rally instructor couldn’t hear it, and so I probably seemed like I raging b* with my thinly veiled  impatience with idle chit-chat before the walk-throughs or overly detailed walk-throughs. But when the timer ran out, everyone in the building could hear that. I won’t even go into what happened when someone moved her crate right next to his and put her dog that had been trading insults with Lackey for a couple of weeks in it.

He could heel well before he could walk on a loose leash properly, and this made outings to socialize pretty strained. Speaking of outings to socialize, they were more outings and less socialization, because he hated being left confined at home. Maybe we were out to dinner, or visiting a winery or a street festival. Lackey actually did really well with these, all things considered, but he had a lot of responsibilities for a baby puppy and very little preparation. I didn’t take him out where I was just taking him somewhere with the sole goal that he could just learn how to exist in a space with a lot going on. I never spent much time walking up and down the driveway with him, teaching him to be polite on leash. He had so much energy, I wanted to take him over as wide an area as I could, for mental stimulation.

So obviously, I suck. Or maybe I have a wonderful dog who might have been even more wonderful if I had known then what I know now. Moving forward, I have already changed what I am doing with Arya based on what Lackey taught me. I spent a week gradually working up from sitting next to her exercise pen the first day to taking Lackey to Rally class and leaving her home alone the night before I went back to work. We’ve spent a lot of time just walking up and down the driveway, and when I see a problem with her loose leash walking, I get right on training it. We do lots of recalls, with terrific rewards for coming. I’ll load her up in the truck to take her somewhere for five minutes, no pressure or expectations, just new things to see.

Learning from the Present

But I want to do better than just learning from my mistakes with Lackey. I want to let Arya teach me her lessons in real time. I’m sure I’ll be loaded with guilt and regrets by the time her puppyhood is done–that’s just how I am–but maybe this way there will be fewer of them. The cool thing is that even the most well-raised puppy is loaded with behaviors that need to be “fixed” if they are to live happily in our world. The reason I say it’s cool is that I can choose to view each and every one of those annoying or possibly endearing but unsustainable behaviors as a cue to me that I need to do some training.

The first thing I do when one of these little nuggets of natural but undesirable behaviors happens is to remember that all behavior has a purpose. Then try to think how I can provide training that fulfils that purpose in a more acceptable way. As an example, biting at my feet. What could she be trying to accomplish with this? Well, maybe she wants attention. Perhaps she’s hungry. And possibly she’s over-aroused, which can happen if a puppy gets over-tired.

So, what ticks the boxes of getting attention, possibly getting some treats, and getting the arousal down–that has to be done anyway as part of training? Well, husbandry behaviors such as doing nails, getting her bite checked, etc. But wait a minute, you might think. Isn’t giving her what she wants just reinforcing this undesired behavior? Well, maybe. First, if you view this as a relationship between two thinking, feeling beings, you could conclude that trying to figure out what the other is communicating and provide that is the right thing to do, even if you don’t like the form of the communication. You don’t need to keep asking for something that you get right away.

But, just in case, we’ll start out these sessions by teaching a lesson that’s very difficult to ever teach to an adult dog–that sometimes people will hold you down and do things to you, and that’s ok. Whether it’s doing a nail or holding a leg still or checking her bite, I start these sessions by doing something mildly annoying. Which is only fair, because having your ankles bitten is pretty annoying, too. Then, after a few treats, I move on to gentle petting and tickling all over, more treats, a back scratch, and then a tummy rub on the way to put her into her crate or ex pen to sleep it off.

Another example would be when she and Lackey get to playing too rough and I have to tell him to sit and detach her from his face. Time for something completely different, that puts a barrier between the two. So we play “being in the tub is fun!”

I try to reserve skills training sessions, such as “Attention is the Mother of All Behaviors” or Crate Games, for when she’s calm and doing the kinds of things I’d like her to do moving forward (as opposed to annoying things). This keeps the balance skewed in favor of life skills. If she has those, it will be much easier to add other behaviors later.

Gratefully Accepting All the Presents

It can be really easy to focus on the things that need “fixing,” but it’s important to see all the beautiful seeds of emerging behavior and encourage as many to flower as possible. She offers sit pretty already. When she is curious about something, she has a natural stack that could stop your heart. She has an annoying/endearing behavior of running backwards back and forth in front of me which could be a killer Freestyle move if I can capture it in such a way that I don’t break both our necks tripping on her.

When she comes out of her crate, she’s the most darling calm little love bug. Mostly I just enjoy the heck out of this time and try to build more duration, but I have been known to pick up a back foot or two.

This period is so brief and so important to the next decade-plus of both our lives that it’s easy to stress out over all the details and not enjoy the fun of watching this new little personality develop. I had a plan for Lackey–he was going to be my left arm, an extension of me. And he is, neuroses and all.

It will be ok. Breathe, play, and love.